This is my brother Tony about to start work. We were painting a field of vines and a row of pines.My effort is shown below. Tony's painting was so much better than mine, perhaps he will put it on his web site! Tony lives at Pinet in Languedoc-Roussillon, France so the strong light in the south of France was very different to the light at home in Scotland.

Posted by Gerry Active at 14:29 No comments: 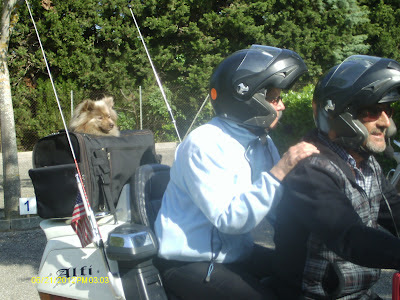 The Gerry Active 2012 Tour de France Cycling team was overtaken by this motor cycling trio. Was it imagination, or is that a superior smile on this speed happy hot dog?
It reminded me of the cartoon Dick Dastardly and Mutley. Anybody remember them?

The Gerry Active team are quite used to being overtaken, even by walkers! But this is the first time by a dog on a motorcycle!﻿
Posted by Gerry Active at 11:55 No comments:

The Gerry Active Tour de France started at Saintes with a puncture. I notice my rear tyre had a puncture just before loading onto The Bike Bus. 24 hours later I was mending this while the other four loaded their bikes. We set off in the direction of Royan where we caught the ferry across The Girronde river to Le Verdon Sur Mer then on to Montelivet for our first camp site. Spent two days here recuperating from the long bus journey and first days ride.

Then next day on to Le Porge where we spent two days holed up in a hotel due to extreme weather.This was definitely not supposed to happen, we could get this in England! The next day was not anticipated either! Miserable day, rain and lots of traffic as we negotiated the Archachon Basin towards Salle where we got thoroughly soaked pitching our tents. The next days were spent cycling to Bazas and Nerac and on the 14th the weather decided to agree with our dreams and it turned hot. We stayed at the lovely farm site near Nerac for two days enjoying the sun. The farm site had a swimming pool and restaurant and the owners were very nice. Then in scorching heat we cycled to Mirande where we again spent two nights. The next day the weather changed abruptly again and we continued to Lourdes via Tarbes. Just after arriving at Lourdes and the campsite we had a terrific thunderstorm. John and I were sitting with the rain dripping down our upturned hoods ( Can't remember where the other three were ) when a French family brought us some sandwiches and a bottle of wine. They must have thought we were too old to be camping in the rain and I must admit we were coming to that point of view ourselves. Anyway this kind act lifted our spirits. Poor John had gout and was talking of going home early. Lourdes is amazing, a mixture of tackiness and something genuine. Much to my surprise my cynical friends were impressed. I sat in the enormous church by myself for quite a long time and watched the procession of invalids being wheeled into the grotto by the nuns. Peter and the two Rogers left our tour here on the 21st June. John and I continued. My prayers for his gout were answered ( or was it that stuff from the pharmacy? ) and we caught the train to Toulous.


We planned to overnight in Toulous and then ride The Canal du Midi all the way to Agde. With this in mind we checked into a two star hotel close to the railway station only realizing when we ventured out for our evening meal at we were in what seemed to be a red light district. There was a ' Private Club ' just across the road with black girls hanging out of windows clearly looking for business! The canal du Midi is some 240 Kilometres long. The real Tour de France would have done it in one day but we didn't want to compete and it took us four days, not all of it on the canal as long sections were difficult to cycle with tree roots, rocks and uneven ground. We stayed at Castelnaudary where the site manager Karim spoke perfect English having worked at The Red Lion Hotel in Burnsall, Yorkshire. he was amazed that I knew it and I was amazed he knew Osmotherley where I had my business for ten years! Then to Carcassonne with it's amazing old city high above the new town, see photo below. That night I watched Spain beat France in the camp bar. Lots of glum French faces. Spain went on to win the European cup. Next day on to Pouzols Minervois ( off the canal ) and finally to Villneuve les Beziers almost at the end of the canal. Leaving the canal at Agde we cycled to Frontignan via Sete where we had a couple of days lazing by The Med.

We had unbroken sunshine since leaving Toulous so we enjoyed swimming very much. I left John here as he was due to return to England from Montpellier on the 1st July and cycled on to Pinet to stay with my brother Tony and his wife Erna. It was a strange tour this year and we all agreed in retrospect that all in all we prefered the mountains even though the cycling is much harder. The question is will we be strong enough to tackle them next year? Well if Bradley Wiggins can do it!