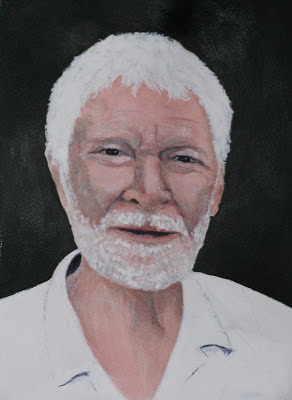 Can you tell me who this well known man is?

Some of you should know!
Posted by Gerry Active at 17:05 2 comments: Since the very successful London Olympics the already high profile of London Mayor Boris Johnson has soared even higher than his own ego.

His name is increasingly mentioned as a future Prime minister. Everybody loves his jokes, his optimism, his charisma, his charm and his political incorrectness.

He is a breath of fresh air in a world of dull politicians and doom and gloom. No wonder Conservative leaders are worried as his appeal crosses party political lines.

However there is no need to worry for behind the cultivated buffoonery there is a razor sharp mind and a gigantic ambition. Did you know Boris was born in New York and therefore why should he not leap frog Downing Street and run for President of the United States of America?

Are you a fan of Boris?
Posted by Gerry Active at 09:24 No comments:

Heather and Birches in Moonlight. 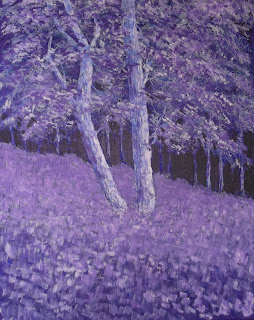 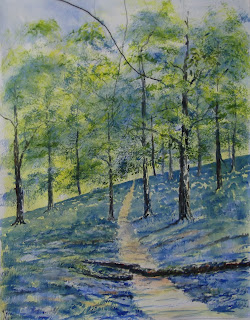 This painting was started in May and I have just completed it. I sat in this lovely bluebell wood only half a mile from a very busy Hawkshead in The English Lake District. I was completely alone for the entire painting session.

It is mixed media. Watercolour and acrylic and the size is 40cm x 30cm
Posted by Gerry Active at 01:42 No comments: 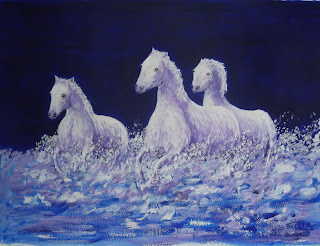 Available to buy from The Picture Framers Gallery in Forres.
Posted by Gerry Active at 12:25 No comments:

Rivers in Flood. Spate of Sales too.

The rivers here in Scotland have been in spate after the worst storm for 30 years.

I have had a spate of sales too! I sold two framed prints which were on display in The Basil Harbour Cafe, Nairn. One large print of Black Rock Cottage, Glencoe and one standard size print of Flooded Meadow.
From The Picture Framers Gallery in Forres a large original of Flooded Meadow 2 was sold.

In reality most artists like myself do not make much money from art but it is nice to think some people like your work enough to buy it.

As always when we get together for a cycle ride things don't go as smoothly as we would wish!

Roger had to drop out at the last moment and the other three travelled up to Scotland at the precise moment the worst September storm for thirty years struck Great Britain. John left Norwich on the 25th but couldn't get to Edinburgh by the usual route due to flooding and was diverted to Birmingham, then Crewe where after a long wait he got the sleeper train from London. Finally arriving on the 26th! Peter and Terry both had delays and route changes but did make it in one extremely long day.
Terry came with 5 T Shirts printed with the slogan ' The Gerry Active Tour of Scotland 2012 ' So off we went proudly wearing our T Shirts. The first day was a forty mile ride to Aviemore and stopping for lunch at Grantown on Spey we had a request to join our club by a fellow diner. We had to turn him down as he was far too young and looked exceedingly fit! Not that we are ageist or anything like that!
Yes the T Shirts were real ice breakers. We were asked questions by a South African man in Aviemore and a lady in Nairn both of whom were connected with promoting cycling. The second day was another forty mile day to Craigellachie, a splendid ride along and above the river Spey. The next leg took us past The Glenfiddic Distillery where three Gerry Active members took a tasting tour, emerging one hour later considerably fortified and looking less geriatric. All in all we had quite good weather and enjoyed six days cycling and great camaraderie.

Posted by Gerry Active at 13:05 No comments: