Did you know that Psychiatrists in America are five times more likely to commit suicide than the general population?

Abhidharma Buddhist Scholars identified 51 mental events and advised how to overcome the negative ones.

The American Psychiatric Association ( APA ) in it's reference book ' Diagnostic and Statistical Manual for Mental Disorders ' ( DSM ) lists 374 mental disorders. It seems almost any normal life event can now be diagnosed as a mental disorder and treated!

Many of the relatively new childhood disorders such as Attention Deficit Disorder ( ADD ) and Attention Deficit Hyperactivity Disorder ( ADHD ) for which drugs such as Ritalin and Prozac are given could be addressed by a change of diet.A child consuming 6 to 8 soft drinks a day may be ingesting over 70 teaspoons of sugar or worse Aspartame.No wonder they would be hyperactive!

Many adult disorders could also be treated by dietary changes but it is not in the interests of the burgeoning Psychiatric profession to offer less harmful solutions.This is not to say that in some cases anti depressants can be appropriate but when you consider that 56 per cent of the American Psychiatrists who committed suicide had prescribed themselves drugs, questions need to be asked.

If you want to stay sane don't think Shrink. You may be prescribed something that could harm you.
Posted by Gerry Active at 11:48 2 comments:

The Cuckoo and God's Creation 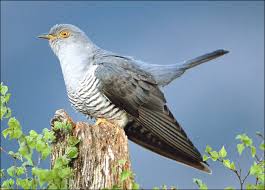 Listening to wonderful birdsong the other morning I was ruminating on the perfection of birds. Unlike humans they just are. They never have to make unethical decisions. Yes raptors hunt and kill but never out of conscious cruelty. In the distance I heard a cuckoo which reminded me there is no such thing as complete perfection! What was God thinking of here? As far as I know it is the only bird that produces offspring in another birds nest. When the Cuckoo chick hatches it then murders the other chicks by levering them out of the nest. Still in the broad sweep of things nature is perfect. Why did God create mankind with our capacity for destructive behaviour of a terrible kind?
Posted by Gerry Active at 10:08 1 comment:

Yuchiro Miura an 80 year old Japanese man reached the summit of Mount Everest last Thursday to reclaim the record for the oldest man to climb it. He had climbed it twice before, aged 70 and at 75. Truly a Gerry Active hero.I hope this inspires my fellow Gerry Actives to raise their own horizons.
Posted by Gerry Active at 00:57 No comments:

Have Unicorn will travel. 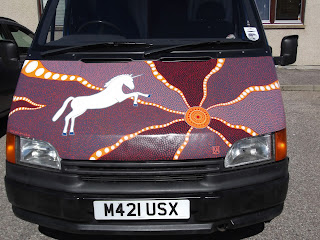 This is my friend Bryan's camper van. He drove off towards the sun last October only to finish up stuck in snow all winter in Germany. He was going to paint all his van like this but in the event painted this during the last week or two back here in Scotland.

Some photo impressions of my recent cycle trip to the Czech Republic.