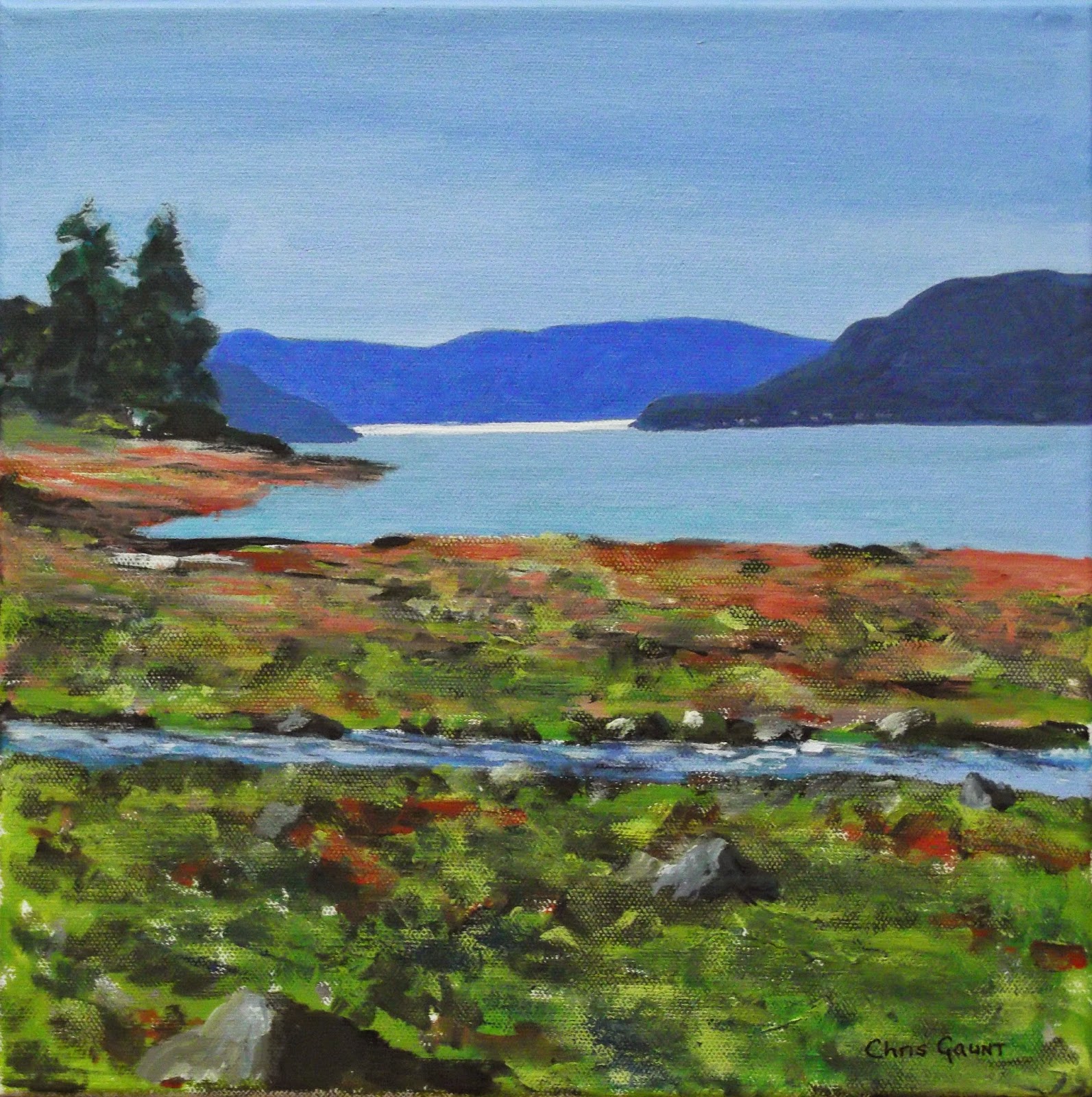 I have just spent a very pleasant weekend on the Scottish West Coast. I was with a large group so had little time to paint. However I did squeeze in this small canvas which was completed in less than one hour.
The view is from Ratagan looking down Loch Duich in the general direction of Eilean Donan Castle and Skye.
Looking the other way the view to The Five Sisters of Kintail ( a mountain range ) was superb but as the wind was rather keen I chose the view down the Loch from a spot sheltered from the wind.
The painting is small for me at only 12" x 12" ( 30cm x 30cm ) so is for sale at a small price. Not yet on my web site www.chrisgauntartist.co.uk so if you would like to buy before it goes on, it is only £30.00﻿
Posted by Gerry Active at 13:16 1 comment: 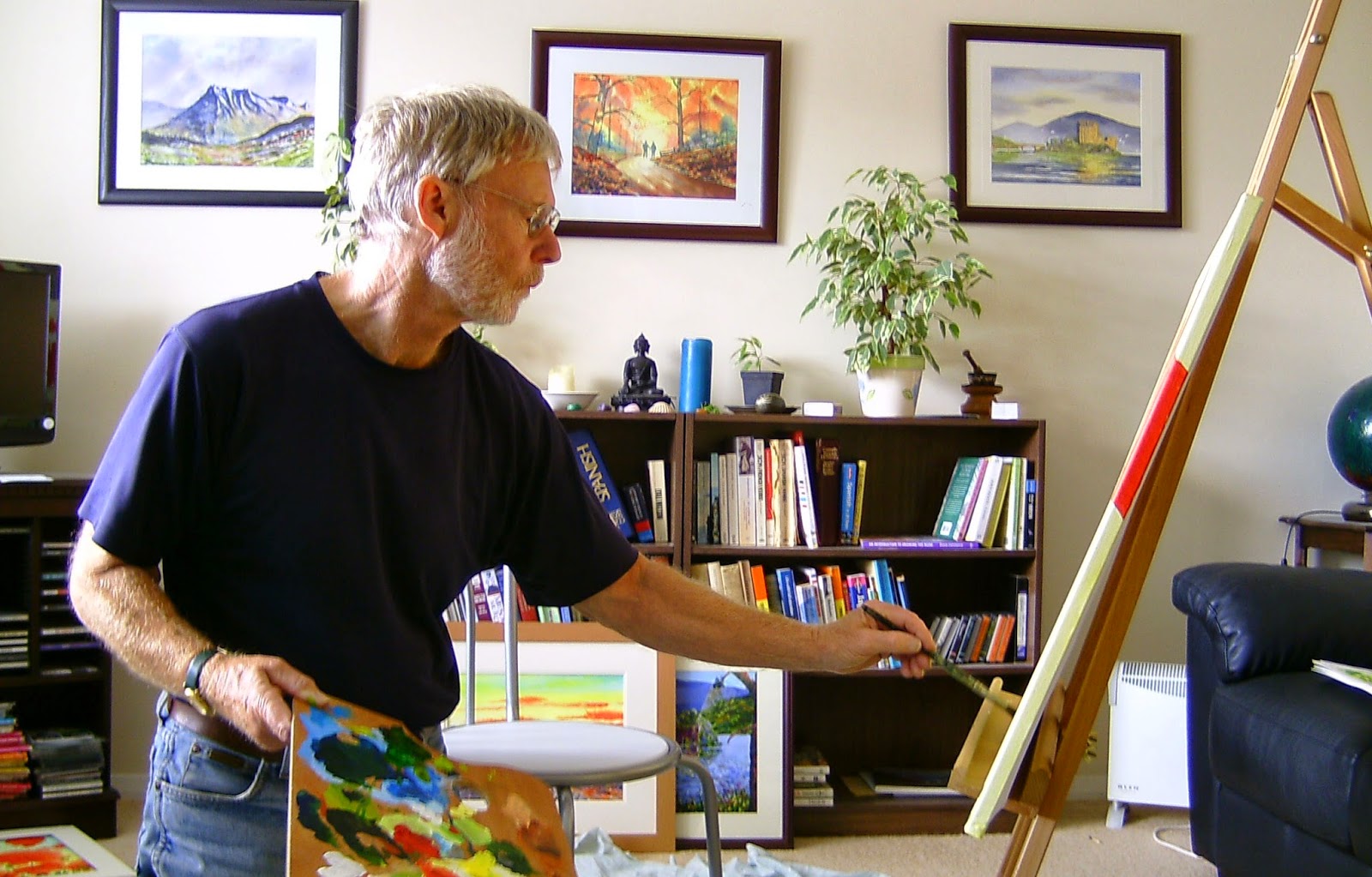 My terrible secret. My blog was started for the disingenuous purpose of trying to get viewers to visit my art web site www.chrisgauntartist.co.uk  and thereby buy a painting or two. Not sure it is working! However I discovered that if I allowed Google to place ads on my blog and website they would pay me each time you clicked on a advert. Google is very clever and tailors the ads to your likely preferences. Now I am a few pence away from my first pay cheque so keep clicking folks. I will say however that I do enjoy putting my quirky thoughts down as they arise. I hope you sometimes enjoy reading them?
Posted by Gerry Active at 15:08 No comments:

The Cullins.Isle of Skye Mountains 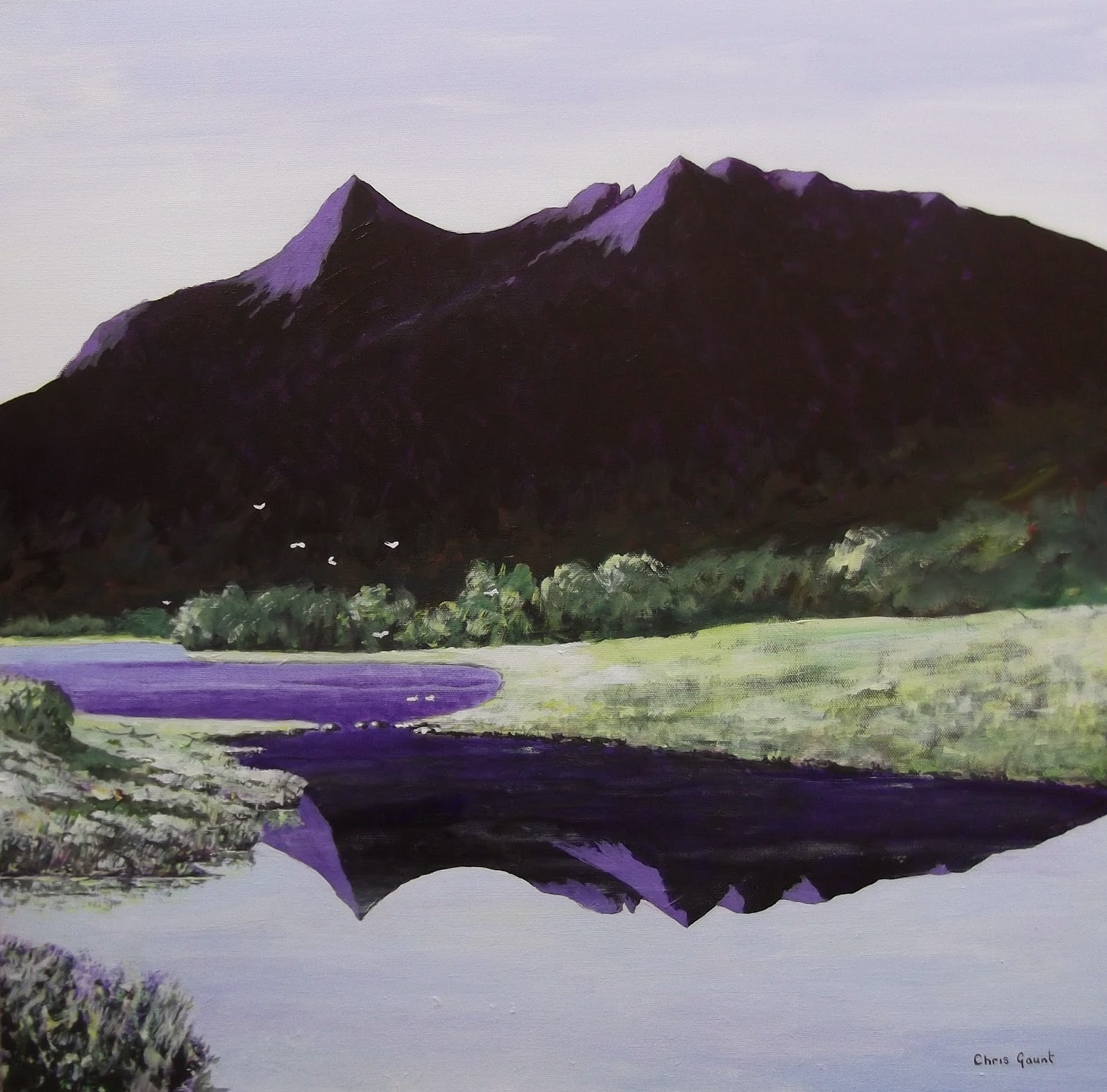 After my exhibition I had a painting pause. This is my first painting since then. I finished it today. It is of the magnificent Cullins viewed from Sligachan. It is the same size as all my recent paintings on canvas. That is to say quite big. 24"x 24" or 60cm x 60cm

To view other paintings of this size on canvas go to my web site www.chrisgauntartist.co.uk ﻿
Posted by Gerry Active at 12:46 1 comment:

How did it come to this?

Who can argue against the original objectives of the European Union? A prosperous, voluntary trading bloc of nation states that would put the possibility  of another European war beyond imagination?

However it is difficult to argue now that it has all gone to plan. The vision, especially the Euro has become an ideology!

Ideologies go beyond the rational. If European leaders were rational they would be able to admit the Euro has been a ghastly mistake. A good idea that became an ideology, an ideology that has locked several countries into generational unemployment which is nothing short of criminal.
So instead of the devaluation of their currencies ( as would have happened in the past ) they are forced to adjust by so called internal devaluations, ie. unemployment, cuts, wage reductions, deflation, lower standards of living etc.

These are the conditions which give rise to another ideology, that is to say a rise in far right national parties or the mirror image of the far left.

If only European leaders would have the courage to tell voters it has been a mistake and that a change of direction is necessary they would gain the respect of the electorate.

I doubt this will happen. Ideologies tend to be pursued to the bitter end against all rational criteria. That is what defines an ideology!

Maybe the Euro will survive in spite of the extreme costs. Maybe the rise of the far right will not lead to war, but it is a terrible risk and the people of Europe are paying a terrible price

Posted by Gerry Active at 14:52 No comments:

We shall not cease from exploration
and the end of our exploring
will be to arrive where we started
and know the place for the first time
My favourite quote/poem by T S Elliot. What does this mean to you? Sometimes when I meditate I like to really contemplate something like this. I turn it over in my mind, savour the wisdom, reflect on what it is that I know for the first time. What has my journey taught me? How far have I travelled away from the ultimate knowing before returning to true understanding. Who or what guides and guided me? Was the exploration neccessary at all? Do you have a favourite quote to which you return as a refuge, an anchor in the stormy sea of life?
My painting is of nature spirits. My guides.
www.chrisgauntartist.co.uk 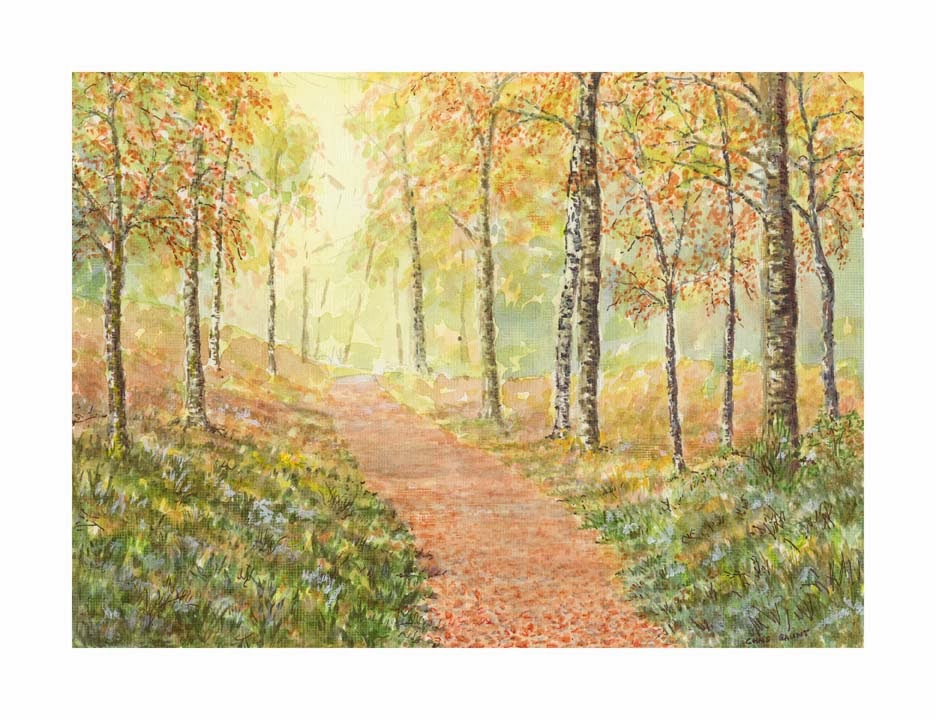 Reflecting on the success of my recent exhibition at Elgin from which I sold nine paintings, I have come to this conclusion. Perhaps it was because my paintings were affordable? Of course I would like to think the buyers recognised my artistic talent! However I priced my work from quite frankly cheap, to reasonably priced. These two paintings were the cheapest and the dearest with the other seven in between. Can you guess which is which! 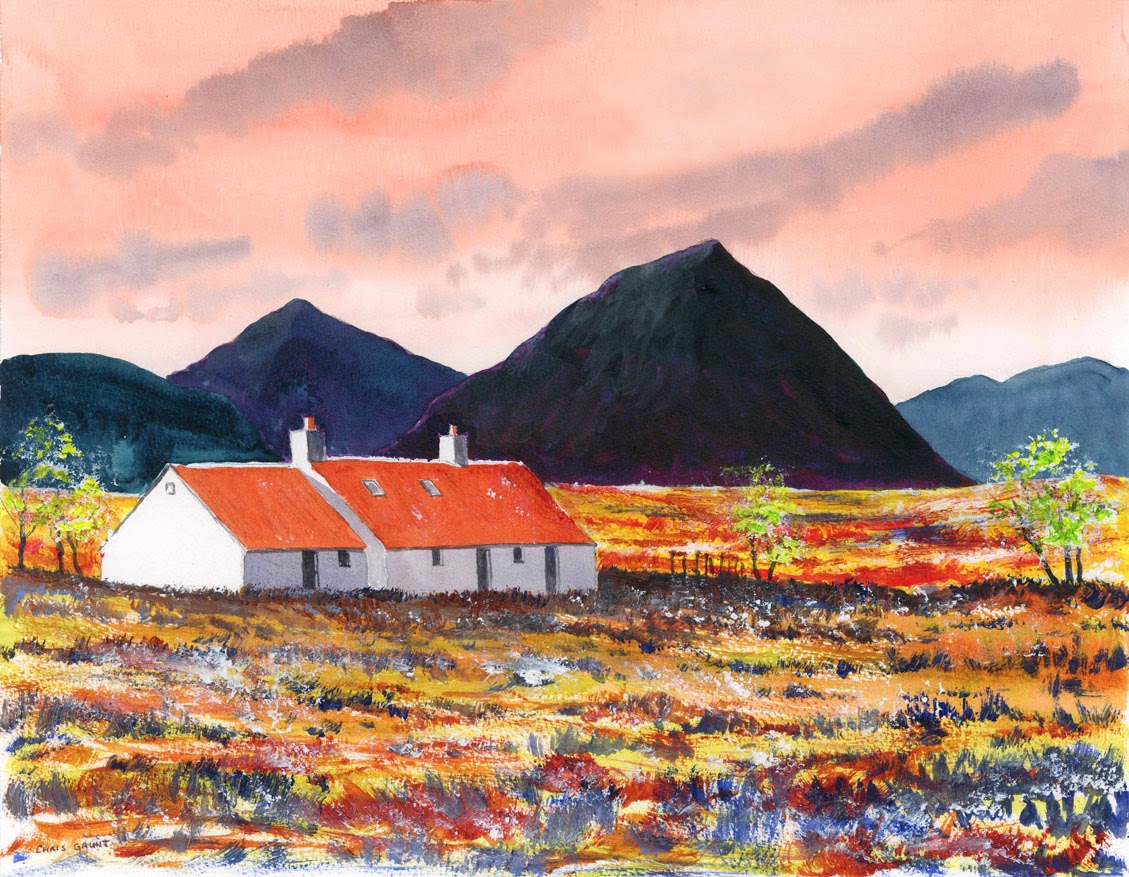 Pensioners would get a 30% reduction at legalised brothels, or would have if the Bus Pass Elvis Party had won the Clifton North, Nottingham, council by election. As it is the Bus Pass Elvis Party beat the Lib Dems who came last! This manifesto pledge is an amusing reflection on current politics and is an antidote to the increasingly divisive Scottish Independence debate. One does wonder where the legalised brothels would be located. Hotels perhaps? If so could they become Heart Break Hotels when pensioners rushing to claim their 30% discount found some things just don't work as well as they used to! With apologies to Gerry Active pensioners especially those still with a smile on their faces!

This story is true. Well you couldn't make it up could you?
Posted by Gerry Active at 11:11 No comments: