Ghost in the Forest 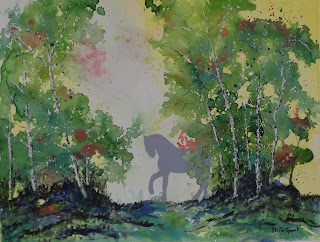 I have revisited this painting. I was quite pleased with it but had the nagging feeling that it was asking for something to appear in the space between the trees. It seemed as if the space was wreathed in mist so I added a ghostly and unreal apparition. Not too sure if it worked.What do you think! All opinions are valued so don't be afraid to express criticism. Thankyou.  www.chrisgauntartist.co.uk

The Path in Spring 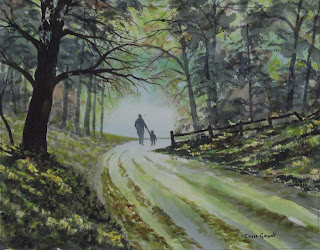 Why is it I am always painting paths, tracks, roads or things that lead to some undefined place. I will leave you to draw your own conclusions! Whatever the reason I so enjoyed painting ' The Path in Autumn ' ( now sold ) I decided to paint this painting ' The Path in Spring ' The size is 40cm x 30cm and is framed and mounted. The frame size is 54cm x 44cm. If you are interested in buying this painting contact me through my web site www.chrisgauntartist.co.uk  to make an offer before it is officially uploaded to the above site. 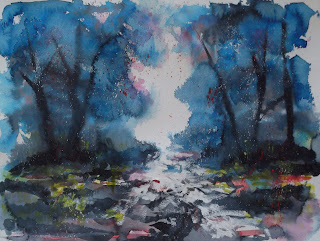 I haven't given up on representational paintings but at the moment I am enjoying this type of free flowing watercolour painting. Essentially paint is dropped onto a wet paper and as it spreads out some sort of form usually suggests itself to me. Then with a few brush strokes before the paper has dried it is possible to create an image. This image may be interpreted by each viewer as something different. What do you see here?

Eckhart Tolle and the Confucius Duck

I was dipping into ' The Power of Now ' by Eckhart Tolle the other night, many years after first reading it. I don't know if it is my age or just that I am looking at it from a Buddhist perspective but I found myself becoming a bit irritated. There is something about these new age gurus that increasingly strikes me as somewhat smug. So many of them are just regurgitating and repackaging old wisdom. Perhaps it has always been thus? If it gets each new audience to look at these things then it does indeed have a purpose. I was talking to a man who had just joined our meditation group. He was an expert in Cognitive Behaviour Therapy and he had just realised how much CBT owes to the Buddhist understanding of the human mind! 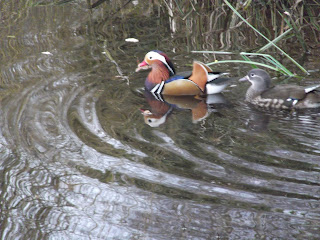 Anyway as any one who has ever read my blog knows, I myself think animals, birds and nature anchor us in ' The Now ' I was therefore pleased to agree with Eckhart when he wrote that he had lived with several Zen Masters, all of them cats! He then went on to write about ducks and the spiritual lesson they give. The lesson being that even when their serenity is interrupted by a brief squabble they just flap their wings and sail serenely on as if nothing had happen. In other words they do not hold onto negativity and resentment about the fight and continue to live in the now. The picture is of  Mandarin Ducks so being Chinese they perhaps are followers of Confucius. They could also be Buddhist ducks but either way they were very serene.
Posted by Gerry Active at 14:43 1 comment: 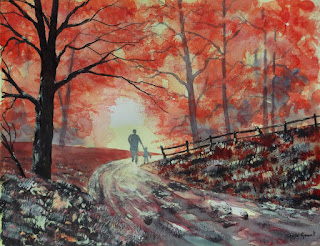 Do any of us really know where we are going? No matter it is the journey that we cannot help making. It does help however if we try to journey mindfully and with a positive outlook. This picture tries to capture the love between parent and child as they enjoy being in beautiful surroundings, content to walk together in a precious shared moment. Little journeys can be just as profound as exciting long adventures. This picture is 40cm x 30cm and is for sale. Along with several recent paintings it is not yet on my website. The price will be £300.00 fully mounted and framed when it is uploaded or in the immediate future may be purchased unframed for £150.00. If interested please contact me at chrisgaunt3@hotmail.com
Posted by Gerry Active at 11:59 1 comment: